A 30 minutes ride into the forests in Germany. I stopped the car several times just to make sure I wouldn’t miss THE SPOT. I parked the car in a snow bank next to the road and followed a path along the forest’s edge. After several minutes of walk I noticed 5 men equipped with huge Canon lenses and only then I knew, I was in the right place, to observe what was estimate to be around 1 million bramblings gathering together for the night. 20 minutes went on and only few smaller flocks arrived, maybe a hundred birds. Everyone was waiting in anticipation of hundreds of thousands birds… was that it?
Just after four p.m. the sky turned dark from all the bramblings arriving and swarming above our heads. I was watching the flocks coming from every direction, becoming one enormous cloud right there, where I was standing. At this point the bramblings were like one organism, swinging in a complex dance. 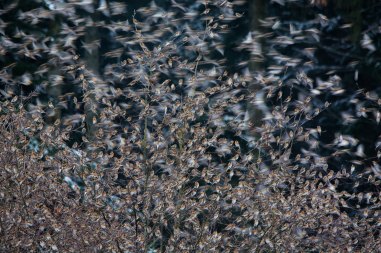 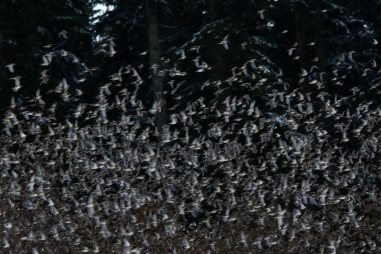 After several minutes of flying around, they suddenly dropped down and sat on every single twig and branch available, all over the place. Was it a 20 meters high fir or was it a tiny birch-tree, every spot was occupied. The birds covered naked branches as if they were a foliage. Perched on pines and firs, as if they were little cones. If they were still, one could not tell that the forest is actually full of creatures. Few more times the birds took off and sat again before complete darkness made it impossible to see them. The forest was vibrating from the soft and quiet brambling calls. Whispers of the puffed up feathers, lumps of snow falling from the dancing branches. Good night bramblings. This is a text widget, which allows you to add text or HTML to your sidebar. You can use them to display text, links, images, HTML, or a combination of these. Edit them in the Widget section of the Customizer.

Autumn in Greenland. Some birds stay all year round in the Arctic, counting on free food from human settlements.

Arctic terns feasting on the beach.